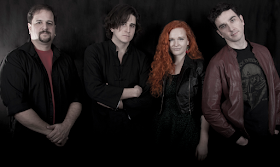 Cherry White, a London based 4-piece seem to have mastered that age old combination of hard hitting songs and sublime technical musicality. Drawing from classic rock influences such as Fleetwood Mac and  The Raconteur’s, Cherry White have demonstrated they intend to rise to the lofty heights of their genre defining heroes.

“Staring at the Sun” is a testament to their musical prowess and draws on a breadth of influences that make it a must listen.  “Drifter” the lead single of the EP is a brooding swamp rock anthem showcasing the feral nature of Donata’s vocals and Russell’s ferocious guitar licks. Donata’s vocal tone is somewhere between Stevie Nicks and Siouxsie Sioux giving it an anthemic quality reminiscent of 70s stadium rock. “Do It Better” helps to cement Cherry White’s position as a band of the future reliant on the sounds of the past. An air of post punk by way of Tango in the Night creates a interesting mix of musicality and fierce lyricism. Cherry White is able to also convey their musical message through a softer, acoustic approach.  “Angel” is one such song that evokes emotion through the thoughtful lyrics while still standing up musically. The true star of the song being Ralph on bass, showcasing a jazz element to his playing that lifts the song to another plain. The next track, “7 Days” could easily be a prime time Van Halen track, it has just the right amount of 80s shredding to make it truly enjoyable. In contrast “Blue Eyes” is supple piece with a highly effective build up, ending on a crescendo worthy of praise. On the theme of praise, “Staring At The Sun” the final track on the EP is a masterful demonstration of eloquent song writing and rhythmic technicality that further reinforces the transcendent quality of the band.

Each song adheres to the preconceived notion of classic blues rock but adds subtle twists to craft a truly unique sound. With anthems more suitable for stadiums than dimly lit clubs, Cherry White is on course to becoming a classic band in their own right .